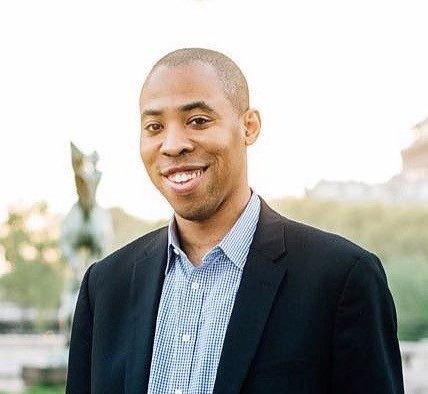 1.    Tell us briefly what a typical work day is like for you.

As a federal law clerk, a typical day at work finds me reading lots of cases, writing a great deal, and constantly interacting with my co-clerks and the Judge to correctly apply the law.

The best part of this job is the intellectual stimulation it provides.  The courts confront a variety of issues—some of which are complex, others less so—but all of which require thorough and careful thinking.

3.    What do you enjoy most about being a member of the Barristers’ Association of Philadelphia?

Being in a room full of lawyers that look like me after spending almost all of my days in rooms where that is not the case.  Because of that, our meetings are both empowering and rejuvenating.

4.    What do you believe has been your most important personal attribute in your legal career?

Connecting with people.  My grandmother gave me two pieces of advice that I have used to great effect in my career: you can never know too many people, and be kind to every person you meet—whether it’s the janitor or the CEO of the company.  I am where I am largely because I followed those two maxims.

5.    What has been the best moment of your career thus far?

About two years ago, I had the opportunity to sit second-chair in a pro bono case heard in federal court in the District of New Jersey that involved an effort to get a seven-year-old Ecuadorian girl returned to her father after she was abducted and brought to the United States by her mother.  Not only were we successful in getting the little girl returned, but the case gave me the opportunity to get on my feet and conduct both an opening statement and direct examination early in my career.

6.    If you hit the lottery tonight, where could we find you tomorrow?

Maybe I’m crazy, but you’d find me working at my desk.  I love the practice of law. The money might give me more flexibility in the type of practice I might have and where I might end up, but I’d still be a lawyer.

7.    What artists are you listening to now?

As a jazz saxophonist, I listen to other horn players quite a bit.  At the moment, I’m really focused on developing the sound I want, and to do that, I’ve been listening to a lot of Dexter Gordon, Hank Mobley, Sonny Rollins, and Philadelphia’s own Larry McKenna.  Larry’s a living legend and his sound and approach on tenor inspire me a lot. If you’ve never heard him play, you should.

8.    What is your favorite restaurant in the Philadelphia area?

9.    If you had a chance to give out your own award, who would you recognize?

My grandmother.  She grew up poor on the island of Grenada as one of 11 children and never finished school.  Yet, she’s easily the wisest person I’ve ever met. She’s also the first friend I ever made, and she taught me everything I needed to know about what love is.  Not to mention that at 97-years-old, she still has a mean right hook. That alone deserves an award.

10.    What advice would you give to members of the Barristers?

Be involved, stay involved, and get more involved.  This organization does great work and makes an impact in ways large and small.  I’m grateful to be a part of it.